I Managed to intrigue people with this animal !!! AH AH AH (evil laugh!!!!)
So, I'm going to try to explain ... without extending too much or making it too complicated !!

First of all, I discovered that way of living while watching a report on TV, 66 Minutes on the M6 channel.
It must have been in February 2014 ... I listened carefully to what that French women, Béa Johnson, after settling in the States for a few years put in place in her home.
I was gobbed smacked when she explained that her household (her husband, her two sons and herself) where generating 1 Liter of rubbish... a YEAR !!!!!! 1 LITER !!!!!

Immediately I started thinking about my kitchen bin, which was filling a 60 Liters bag almost every day !! It was a real smack in the face!!!!
That's when I decided to look into it.
Her secret resided (for the most part) in the suppression of pure and simple food packaging !
You need to know that in France, our garbage is divided in three almost equal parts :
- Food scraps (left overs, vegetables peels, ...)
- Wrappings (every food container : cans, milk cartons...)
- Non recyclables (everything that is not recyclable, bio degradable, or edible!)

So I see you coming... you are going to tell me  "yes but how do we do it ? In the stores everything is already packaged"!!
Well, my answer is WRONG!!!!!!!
Know that the world of BULK is expanding and even so in the big city's!
If only you knew the amount of detailed articles available! We are simply getting back to our origins... When plastic didn't exist!

After the diffusion of that report, I bought her book "Zéro Waste Home" ... where Béa reveals all her life's secrets, her routine and most of all, what this new way of living has brought to her family as much on the health side than the human side of things.
I barely dare talking about the economic aspect ... She said having saved 40% on her budget!! What I think, and you can agree, is simply ENORMOUS!!
She also gives a fundamental notion... the simple “zero waste” rules which are:
Refuse - Reduce - Reuse - Recycle - Rot (and only in that precise order!)

Here I am now, convinced and ready to take the first step... or at least try!
At this stage, we were ready to move house... Leave Paris for Charente-Maritime ... the timing was perfect!!

The first step was to equip myself with jar Le Parfait! You know... Like our grandmother’s one! :-)
I also made my own tissue bags... my famous cloths-bags!
With this base kit I was ready to start the experience!
And it was a success! The merchants where surprised at first but finally convinced with those steps! The message was sent!!!!!!
After that, I made some washable wipes for my younger son and I... a real success!!! I will never go back!! (Tutorial photo and video here!!) The formula is now adopted : finish with the butcher wrapping, finish with the green grosser plastic bags, no more wrapping paper for the bread and no more 18 pads per day in the bathroom bin ...!
It’s a small step, but every little bit adds up throughout the year

After I moved I kept investigating and exploring new leads.
My new district distributed compost bins for free. Without hesitation... since the second day it's been installed in my little garden!!
And I cut short every negative comments ... NO, the compost bin does not smell!!!!!!!!!!! XD

Slowly I turned my blog towards this trend and the power of social media did the rest ... the Hashtag #ZéroDéchet convinced ... a shipload of new friends, with the same intention as me rushed on my Instagram!!!
Even Béa joined me by becoming my 50th member!!!! :-)
And here we gooooooooooo!!
The brainstorming has started ...

Ideas are flying, good tricks pile up, we exchange addresses ... nothing can stop us! We are now supporting one another!
The overall idea is to consume less and smarter, throw less and less away to respect your body, your mind and our planet!

Here you will find a few of those ideas that I have now put in place in my home :

- Jars replace paper wrapping for the fresh food like meat, processed food & fish etc. ...
- Cloth-Bags carry fruits and vegetables, bread, pastry's and dry fruit like pasta, rice or cereals. I've even found compound chocolate and crackers that are wrapping free! I also sometimes buy delicious cake and candies... (OK that's enough ...!!!)
- From now on I only buy the orange juice that comes in a glass bottle ...  You'll see why later on ...
- I've replaced pads by washable wipes (for my make up removal and Valentin's pee pee ... ( Don't look further ... I'm not quite ready for number two's!!!!)
- I favouritise buying Jars instead of plastic wrapping (apple sauce for example or vegetables for the people that consume them in "cans")
- I do the dishes in a dish basin and don't let the water run anymore!
- I wash my hair every 2 to 3 days instead of everyday (that's another concept called  no-poo or low-poo)
- I recycle wrapping that I just can't avoid and I compost
- I have invested in a yoghurt maker (I am so glad I did!!! Its Healthier and so delicious!!)
- I haven't used absorbing paper for 6 months!!!!! Yeah to the microfibre wipes which is so much more efficient!
- I buy my dishwashing liquid in detailed... it's organic, so no chemicals that would end up in nature.
- I make my own laundry powder which is by the way so easy and way more efficient!!!!! (Find the recipe HEREI will be posting more of them soon)
- I buy my shower gel and my shampoo in detailed as well, in a store located in La Rochelle. They just got the patent for this ''soap'' bar! Find the article I dedicated to themHere.

For this 3 last buys I use the glass orange bottles, after emptying and cleaning them of course, as a storage container! (reused) 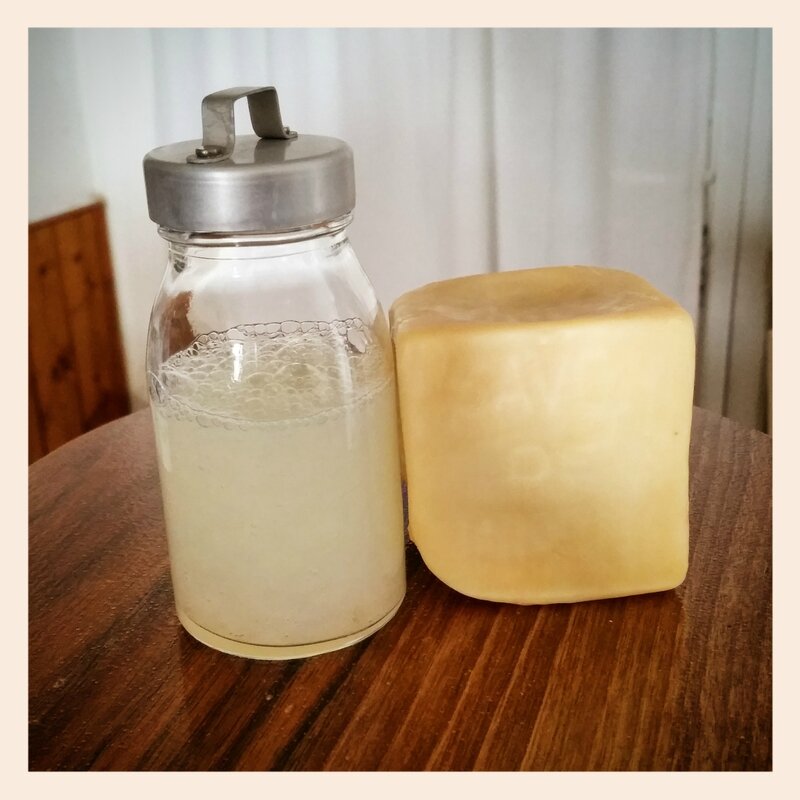 The last idea in place started a week ago ... a little shower hose in my toilet! Ha ha ha ... I can see you making faces!! I will be writing an article on that subject soon... but I can already explain that it's purpose is to replace (not entirely of course) the toilet paper save liters of water per flush!! It can appear as funny to say it like this but after a week I can already guarantee the efficiency of it! I will be coming back to that later!

Now... with all this, we are just waiting for the results!
Well I have them... and they are all positive!!
You remember ... when I told you earlier about using a 60 liters garbage bin almost daily!!
Well last week for example ... I only used a 40 liters one that weighed 5 kg!
I will be using this week as a reference because Hubby (who still works in Paris) was home and filled the bin!! Grrrr!!!
This week he won’t be here ... I already notice a big difference, since it's Wednesday night and the trash is EMPTY! I will be checking further progress later on.

In her book Béa also exposes the notions of minimizing which I'm absolutely not ready to even consider but I still keep in mind another goal to achieve '' de-clutter''!
De-clutter of the house, wardrobe in order to de-clutter your mind and life!
And that... I totally agree with!
But once again that's another subject that I will be coming back to!

I hope you enjoyed the article ...  and most of all I hope you understood the Zero Waste process.
Don't hesitate to read Béa Johnson's book ... it was for a lot of us eye opening!

Thank to Arabelle for this translation from Australia ;-)